TRUE BLOOD Season Finale: The End is the Beginning

The True Blood season finale was all about knowledge and whether it is best to have it or to remain in ignorance. First, Maryann (Michelle Forbes) prepared for her nuptials to the god-who-comes and once again asked Sookie (Anna Paquin) “What are you?” Sookie’s response “I’m a waitress. What the fuck are you?” was humorous, but unenlightening. We could also hear the fear in Sookie’s voice — what is she really?

While Sookie is frightened by her own ignorance, Hoyt (Jim Parrack) discovers the perils of learning the truth. While under Maryann’s influence his mother (Dale Raoul) reveals that Hoyt’s father did not die bravely, fighting off a burglar, but took his own life. And the desire to keep his mother safe from an imaginary burglar is what kept Hoyt from going to college, leaving home or having a life of his own. “I should’ve known the truth when I was 10!” he screams before walking out on his mother. This knowledge may permanently destroy his relationship with her (good riddance, I say).

There were other examples of the knowledge/ignorance theme in the finale. The residents of Bon Temps have agreed to practice collective amnesia, rather than admit to the things that they did while under Maryann’s spell. Ignorance may be the best policy, however, as evidenced by Eggs (Mehcad Brooks), who could not handle the knowledge of the murders he committed. He appears to lose his mind and demands to be arrested.

But there was more to this finale than the simple tying of loose ends. What I really appreciate about True Blood is that it has used its finale episodes to put the next season’s plotlines in motion. So here’s what we can expect from Season 3:

1. Sam Merlotte’s Origins
We know that Sam’s (Sam Trammell) adoptive parents were terrified by his shape shifting and consequently abandoned him at a young age. In the finale he returns to their home for answers about his past. In keeping with the theme of the evening his mother warns him that it is in Sam’s best interest to remain in ignorance. His biological parents are “bad people,” she tells him. But then we see a close up of a monitor. Who is on the other end? In the next shot we enter a room loaded with medical equipment and pervaded with the sucking and beeping noises of a body kept alive by machines. This is Sam’s estranged father and he is dying. I loved that there was no attempt to explain what was wrong with Sam’s father — he simply handed Sam a scrawled note with the names of his biological parents. At the bottom of the note were the words “I’m sorry.” I can’t wait to see how this story unfolds in Season 3. 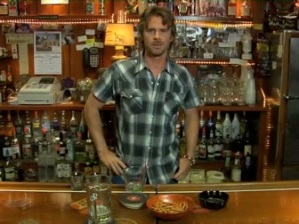 2. Bill’s Kidnapping
Like many fans of the show, I have very little tolerance for the blissful romance between Bill (Stephen Moyer) and Sookie. I rolled my eyes continuously throughout the scene in which he takes her to a fancy French restaurant in a gag-worthy lavender cocktail dress and then (ugh) proposes marriage (I did, however, enjoy learning that it is only legal for vampires and humans to marry in Vermont). Although the writers likely wanted my eyes to fill with tears as Sookie jubiliantly reentered the dining room to tell Bill that yes, she will marry him! only to find him gone, I actually cheered a bit. This means that Season 3 will open with Bill and Sookie apart and, I’m guessing, Eric (Alexander Skarsgard) moving in for the kill. Sweet! Oh yeah, I’m on Team Eric all right.

3. The Murder of Eggs
I was not particularly sad to see Eggs die. First of all, I never caught why people called him Eggs [note: since posting this I have been schooled: Eggs is a play on his real name, Benedict]. Also, his relationship with Tara (Rutina Wesley) always seemed somewhat artificial to me — created under and perpetuated by Maryanne’s spell. I’m confidant that she can find a better mate (like Sam perhaps? Hint, hint, writers). Jason (Ryan Kwanten) shot Eggs in an attempt to grab at the heroism he feels he missed during the Maryanne debacle, and although Frank Sobotka, errr, I mean Andy (Chris Bauer), created a believable cover story for Jason, I’m betting the truth will out as Season 3 progresses. In fact, I’m betting Jason will out himself. The boy has a guilty conscience. 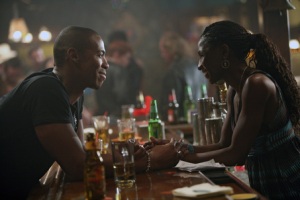 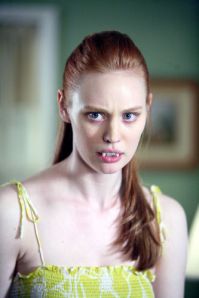 True Blood seems to get better with every episode that airs. When it premiered last fall I was unimpressed and was close to giving it up. My new Southern friends here in North Carolina assured me that Sookie Stackhouse’s (Anna Paquin) accent was laughable (what did I know?) and the series’ vampire plot seemed like Buffy-lite. But slowly the show found its footing. And now I’m obsessed.

I attribute much of the show’s allure to its mastery of the slow burn. What I mean is this: while many programs with rich, soapy plots (The O.C., Desperate Housewives, Gossip Girl)) rush through their storylines, anxious to bring them to a climax before audience interest wanes, True Blood is a true tease. Mysteries remain mysterious and flirtations go on and on and on (I am particulary taken by the brewing attraction between Sookie and Eric [Alexander Skarsgard]). Furthermore, we are always finding out something new about the show’s characters–they evolve and become more complex with each episode.

Maryann Forrester’s (Michelle Forbes) story arc is another great example of True Blood‘s deft storytelling technique and character development. Maryann first appeared at the scene of Tara’s car accident at the end of Season 1, cradling a pig and looking devious. The writers made us suspicious of her character then, but buried her secrets behind Maryann’s sweet, disarming demeanor. In this way we were much like Tara (Rutina Wesley); we know something isn’t right about Maryann, but what is it? That she smokes too much weed, buys too much delicious fruit, and parties too hard for a woman in her 40s?

It is not until almost halfway through Season 2 that we find out that Maryann is an immortal supernatural being and somehow tied to the god, Bacchus. She thrives on unfettered human drives like hunger, lust and violence. The scene in last night’s episode (“New World in My View”), where Maryann crafts a pyre of meat and flowers while the sounds of buzzing flies fill the air was the apotheosis of the excess she had been slowly and cannily directing all season long. It was a satisfying moment.

The best scene of the evening, however, had to be when Jason Stackhouse (Ryan Kwanten) (who really deserves an Emmy for his work this season) and Andy Bellefleur (Chris Bauer) (who will always be Frank Sobotka to me) outwit Maryann’s angry mob by outfitting Jason as the “God who comes.” These two characters are consistently portrayed as the biggest morons in the town of Bon Temps, but they are able to (momentarily) save Sam Merlotte’s (Sam Trammell) life by using their wits. So there’s something else rattling around in Jason’s brain besides the drive to drink beer, screw and kick ass? Good to know.

An honorable mention goes to Lafayette Reynolds (Nelson Ellis) (any scene with Lafayette is a great scene as far as I’m concerned), who banded together with his estranged aunt (Adina Porter) to yank Tara free from Maryann’s spell. At one point Lettie Mae prays for her daughter’s salvation but trails off in despair and, without missing a beat, Lafayette finishes her prayer. Lettie Mae turns, looking surprised. “Jesus and I agree to see other people. That doesn’t mean we don’t talk from time to time” he responds in his usual deadpan manner. So Lafayette has religion? Yet another nuance we can add to his already rich character.

And of course I would be remiss if I didn’t mention “the Queen” (Evan Rachel Wood), who Bill (Stephen Moyer) visits just before the episode ends. We see only her white leg, covered in a stream of blood, before the screen fades to black. As always, True Blood, like any good tease, leaves me wanting more.