WHERE THE WILD THINGS ARE review


My husband does not like to go out to the movies. But after viewing the trailer for Where the Wild Things Are a few weeks ago he changed his mind. “That,” he told me, “I would see in the theater. We can bring the 3-year-old.” Here my heart sank: I was ecstatic that my husband was willing to venture out of the house for a movie. But after looking into the film’s production history and reading early reviews, I knew that this film was  not for 3-year-olds.

Seeing the film this past weekend only confirmed my hunch. It’s not that Spike Jonze’s vision of Maurice Sendak’s classic 1963 book is too violent for children (though there are scenes in which lives are threatened and limbs are removed). Rather, the problem is that the movie is simply not for children. Case in point: when I went to see the film a girl about the age of 7 or 8 was seated in front of me and she continually asked her parents questions like “Why was that funny? What happened?  Why did you guys take me to a 9:30 pm movie?” Okay, that last question was mine.

This child was frustrated and my guess is that the film will also frustrate audience members who were hoping to share the movie with their children, much as they shared the beloved book with them. But, I for one am completely satisfied with Jonze’s re-visioning of Sendak’s work. I’m glad it’s not for kids. 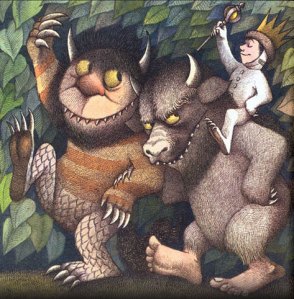 While Jonze took many liberties with his adaptation, the original story remains in tact. A little boy is punished for being a “wild thing!” and escapes to a world in which being a wild thing is celebrated. After indulging his id for a while the boy decides to return to the place  where “someone loved him best of all.”

Jonze’s film completely immerses us in the consciousness of a 9-year-old boy (Max Records):  we listen as he composes imaginative stories for his mother while idly poking at the pantyhose on her toes and we experience how a child’s emotions can change in an instant from pure joy to pure pain during a raucous snowball fight. And this is just in the first 15 minutes of the movie.

Once Max reaches the land of the wild things he  is made king of all wild things and his first post-election promise is to “keep out all the sadness.” How does he does he achieve this impossible task? By initiating a “wild rumpus” through the woods, drafting plans for an elaborate fort — a place “where only the things you want to happen, would happen” — and by promising the beasts that every night they will sleep in a “real pile” (that is, in a giant snoring heap of wild things). Of course, Max soon learns that it is impossible to keep all of the wild things happy all of the time. Carol (James Gandolfini) is perpetually jealous, Judith (Catherine O’Hara) gives him way too much lip, and KW (Lauren Ambrose) insists on making friends (or are they captives?) outside of her small social circle. In other words, Max learns that he much prefers being a child. Let the adults worry about keeping everyone happy. Amen, Max.

For me, the emotional high point of the film was when Max boarded his boat to go home (a trip that lasts “night and day and in and out of weeks and almost over a year”). The wild things gather on the shore to say good-bye, looking forlorn and abandoned, as children do when a loved one departs. KW approaches Max, putting her face against his, and tells him, “Please don’t go. I’ll eat you up, I love you so.” That was always my favorite line of the book because it could easily come out of the mouth of a child or a parent. I often tell my daughter, when she is being particularly lovable, that I could “eat her up.” For me this is a gesture of love, but for her this is a frightening concept: to be consumed by the love of another. “Don’t eat me up!” she cries and then I have to assure her that I am only joking. But I’m not, really. I could eat her up. Along the same lines, when my daughter was younger she would occasionally bite me when giving me a big hug. Even children understand that love is the overwhelming desire to consume the beloved.

A columnist for Entertainment Weekly, Christine Spines, took her 5-year-old and 15-year-old sons to see the film and wrote about her experiences. Apparently, the 5-year-old “loved” it. But I still see this as a movie for adults, not for kids. Kids don’t need to see Where the Wild Things Are because they are living Max’s life right now. Children know well what it is to run and jump with no purpose other than the joy of running of jumping. Children are capable of  imagining entire worlds for themselves in which they are the king. And children understand that adults have a responsibility to take care of them and to love them, even when they are acting most like a wild thing. Adults, on the other hand, need to be reminded of these departed joys. This movie filled me with both longing and happiness. This movie is not for my daughter. This movie is for me. Thanks Spike.

12 thoughts on “WHERE THE WILD THINGS ARE review”

I agree with this review so much. Everything about this film was for *me*, not the little brat in the front row who’s Dad refused to take her out of the theater even though she was constantly talking gibberish at the top of her lungs at the screen. It was deeply personal, emotional, and about childhood, rather than for children. It seems it had a good opening weekend, I hope it gets the respect it deserves moreso in coming weeks, as the cantankerous old critics who are reviewing the film badly because it’s “not good for kids” get swept under the rug and those that discover its beauty post their reviews.

I agree this isn’t content you want to introduce young kids to. I remember very clearly the point in my life at which I realized that most of the people you meet will be needy in some unique, unpredictable way, will let you down when you least want them to, will “eat you up” in the bad way. (Not the really bad, cannibalistic way; just the way that involves being hurtful to avoid feeling their own hurt.)

Bigger-picture, the film felt a lot like a condemnation, decades too late, of the all that peace and love talk from the ’60s. The big fort reminded me of all the places that called themselves “communes” but were really just overstuffed Brooklyn apartments, and the desperation for a leader who could “keep out all the sadness” smacks of the ceaseless guru-hopping that led to so much disappointment. (Cue: “Sexy Sadie.”)

Devan, interesting take on the film, especially since the original book was composed in the 1960s (though I don’t think any of these themes appear in that original text). But yes, a guru is a figure who promises to keep out all the sadness and always, always fails. The more I think about this movie, the more depressing (but also realistic) it seems.

Yeah, “depressing” fits for me too, at the same time that I’m excited about its existence as a movie…

I’m looking forward to seeing *WtWTA*, but I’m equally excited/intrigued by the way that children are being constructed on the blog and in the comments (can I use this for my children’s lit course next semester? 🙂 we spend a lot of the semester talking about adult anxieties RE children ) …

That books sounds great Will. And you may use anything you like in your course!

I love this review! Very touching to read!!!

GREAT review! When K.W. delivered that line right before Max left, I bawled. And I knew it was coming! Something about the way Jonze captured the emotions of childhood was just captivating and so completely heartfelt.

I wrote my own entry on my WP blog today (although it’s not as well done as yours):

My gut feeling is that the perceptions of Jonze’s movie will improve over time. My own perception has already done so. I came out of the theater with a twinge of disappointment, telling my wife that I liked it but not saying much else. Just a day after watching it, though, I remember the striking images, the convincing presentation of child sensibilities, and the downbeat (but right) ending.

I remember reading that the critical esteem of Kubrick’s films tended to grow over the years. Is there a Kubrickian effect?

That is a great blog topic, Randall (hint hint), if you’d like to write one…

I agree about Where the Wild Things Are–walking out of the theater I was a little dazed. But the more I thought about it, the more I liked it. And I thought the ending was fairly upbeat–Max returned home to his relieved mother!

I found the film very interesting in how it depicted the world and imagination of children and thought the child and the voice work by the adult actors doing the monsters were great, but I must confess that, despite its brief 100 minute playing time, I fidgeted like a kid amped up on sugar watching a foreign film and I’m not sure why, considering deliberately paced films and TV don’t bother me. Heck, MAD MEN is my favorite show. Like Max, we’re kind of waiting for stuff to happen that might be fun and interesting. The movie plods along aimlessly and the characters seem to improvise things to do to kill time, which is kind of how I felt life was for me as a pre-junior high kid out in the country with no city neighborhood to play in and few kids my own age around, save for my younger sisters whom I’d torment because that’s what big brothers do. The barrenness of the movie’s landscape felt familiar in that way. While these aspects of the film initially left me restless and scratching my head and shrugging my shoulders in the theatre, I later came to appreciate the film for bringing me back to that old mindset I used to have and that atmosphere I used to feel. I guess that was what Jonze was trying to do all along. Nonetheless, while I ultimately enjoyed and appreciated it for its intentions and accomplishments, I’m not sure if it’s a movie that screams for multiple viewings. In a similar fashion, THERE WILL BE BLOOD is a brilliant masterpiece but, save for a few really key scenes, hard to sit through more than once, though its power is not diluted by this.