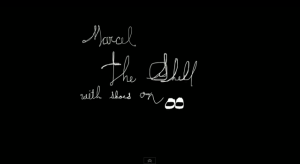 Although I had heard about Jenny Slate and Dean Fleischer-Camps’s stop-motion video, “Marcel the Shell with Shoes On,” over a year ago, it was only after the sequel, “Marcel the Shell with Shoes On, Two,” premiered  on YouTube that I finally decided to watch it. Then I watched it again. Then I played it for my kids. Then I sent the video to friends. Then I began to quote it obsessively to myself. Of the two videos, the sequel is the superior text (due to it’s exploration of shell hardship), but both should be watched.

The first thing that grabbed me about this video series is its format. Much like popular single-camera television comedies such as Arrested Development, The Office, Parks & Recreation, and Modern Family, “Marcel the Shell with Shoes On” is filmed as if Marcel is the subject of a documentary. Marcel addresses the camera directly, answering questions and pointing out items that appear in his home, such as a pet made out of lint.  And like the subjects of The Office and Parks & Recreation, Marcel’s world is profoundly mundane. Nevertheless, Marcel immediately ingratiates himself with the audience because 1. he is an adorable shell wearing tiny adorable shoes and a single googly-eye and 2. Marcel has a nasaly, childlike (or should I say shell-like?) voice, courtesy of Jenny Slate. The fragility of Marcel’s shell body and single eye, combined with Slate’s spot-on voice work, make Marcel into an ideal subject for the smallness of the new comedy verité” genre. Like Parks & Recreation‘s Leslie Knope (Amy Poehler), Marcel is both aware of his inconsequentiality and yet, is still proud of who he is and how he lives his life. He is an eternal optimist.

Most of the humor of the series is based on Marcel’s smallness and the way that smallness impacts his ability to function in a world built for large, resilient humans, not tiny shells. He often asks his off-screen interviewer questions that resemble the kind of jokes one five year old tells to another: “Guess what I use for a beanbag chair? A raisin” and “Guess what I do for adventure? I hang glide on a Dorito.” These jokes, silly as they are, paint a picture of Marcel’s tiny world. Furthermore, Marcel is usually filmed in such a way that we see the world from his small perspective. The camera films him at eye-level when he stands on a laptop or book and sits on the floor when Marcel scurries under the leg of chair to avoid his new puppy. This cinematography gives us a  sense of how large the world must look to a small shell like Marcel.

However, Marcel seems gleeful, not discouraged, by the limitations of his smallness. His size forces him to be inventive, to tinker with the objects he finds around him and put them to new uses. For example, my favorite bit in the entire series revolves around Marcel’s primary mode of transportation — a bug:

“If you do drive a bug you have to be pretty easy-going because you’re only going to get to go where the bug wants to go. One week there was a maple sugar syrup spill in the kitchen and every time I would ride the bug, no matter where I wanted to go, I would just end up back in the kitchen.”

This anecdote reminds me of a Shel Silverstein poem I read often as a child:

If you were only one inch tall, you’d walk beneath the door,
And it would take about a month to get down to the store.
A bit of fluff would be your bed,
You’d swing upon a spider’s thread,
And wear a thimble on your head
If you were one inch tall.

You’d surf across the kitchen sink upon a stick of gum.
You couldn’t hug your mama, you’d just have to hug her thumb.
You’d run from people’s feet in fright,
To move a pen would take all night,
(This poem took fourteen years to write–
‘Cause I’m just one inch tall).

As I child I loved Shel Silverstein’s poetry because he managed to capture, in equal parts, the profound joy and the profound terror of being child. Silverstein understood that the child’s imagination is a gift and a burden. Imagination allows children to transport themselves to places that are exciting and wonderful and yet, because of the boundlessness of the imagination, these places can easily become scary. Sure, if you were one inch tall you could surf on a stick of chewing gum. But you would also find full-sized feet terrifying. As a child I always despaired over the line “You couldn’t hug your mama, you’d just have to hug her thumb.” One wonders if Marcel possesses the ability to hug: he has no arms and he’s a shell.

Marcel offers the same mixture of joy, terror, and sadness as any good Silverstein poem. For example, after the aforementioned bug anecdote, Marcel concludes “Really, what you just have to want to do is take a ride.” Here Marcel takes a situation that should be infuriating — a mode of locomotion that cannot be controlled — and makes it into something liberating. Riding a bug is about a willingness to have an adventure — not about reaching a predetermined destination. Likewise, Part Two concludes with the following exchange:

This statement would sound hokey in a different context (though I think Leslie Knope could also pull it off). But it is preceded by a shot of Marcel standing on a white countertop, looking offscreen towards a window, as chimes tinkle softly. He takes a deep breath and sighs, then turns to face the camera with this insight. Afterwards, he turns back to face the window, enjoying existence, mundane as it is.

Of course, life for a small shell isn’t all fun and games — it is also plagued with hazards. In Part One Marcel explains how he longs for a dog. In Part Two he gets his wish, though clearly even a small dog is too much for Marcel. In one scene Marcel runs off camera, screaming, after the dog jumps us to bark at the door. And in Part Two, Marcel explains that he once had a sister named Marissa. “What happened to her?” the interviewer asks. “Someone asked her to hold a balloon.” Marcel doesn’t elaborate on what happened after his sister took the balloon. Instead the camera cuts to a new scene in which Marcel discusses his dog’s proclivities (“Look at him: treats and snoozin’, snoozin’ and treats. That’s it”). The subject of Marissa comes up again later in the video, thus making it clear that her loss was not trivial: “It was pretty hard at the time but now I just think ‘Ohhh, you know, she’s travelling.'” Marcel is still mourning the loss of his sister. But he also understands that life is filled with difficulties and tragedies, especially when one is a shell, so it’s best to focus on the small things that bring us happiness. Like wearing lentil hats and having friends over for salad.

Life is hard for a shell. It’s easy to get carried away by a helium balloon, trampled by your own pet dog, or worst of all, ignored. But Marcel enjoys living his life — sleeping “eight to the muffin” in a fancy hotel and reading receipts for pleasure — despite it’s obvious complications. After I showed this video to my daughter this morning I asked her:

I think this is why I am so captivated by “Marcel the Shell with Shoes On.” It’s difficult to make humor sad and sadness humorous. But Marcel walks that line perfectly. While wearing perfectly tiny pink shoes.

Thanks for this! You described my own love of Marcel perfectly…funny and sad, adorable and hilarious. I just watched the new one for the first time, and felt a bit choked up at times and laughed out loud at others. Marcel is the best!

I like texts that make me laugh and cry within minutes! Also, my dog’s favorite activities are 1. snoozin and 2. treats.

I had never seen Marcel the Shell. You have converted me. It is going to spread around North London like a virus now!