Recently I was asked by a colleague who runs East Carolina University’s Ethnic Studies Film Series to provide an introduction to the January 31st screening of The Help (2011, Tate Taylor). I agreed because, having just read the book and watched the film, I wanted to try to come to terms with what it is that rubbed me the wrong way about these two texts. I loved Kathryn Stockett’s writing style in the novel and I loved the actresses’ performances in the film, but after completing both I felt a profound sense of discomfort with them, as did so many people who read the book and watched the film.

I thought this introduction would be of interest to my readers, so I am publishing it here. There’s nothing particular earth-shattering about my arguments, and in fact, most of what I have to say about these issues comes from an article in The Daily Beast, originally posted by Dr. Kristen Warner, who consistently links to thought-provoking articles on her Facebook timeline (and you thought Facebook was useless!). In fact, if Kristen lived closer, I would have brought her in to do The Help introduction herself; even without having seen the film herself, Kristen’s insights on these issues are better articulated in a series of tweets or casual Facebook comments than I can do in an entire blog post.

The reason I wanted to do tonight’s introduction for The Help is that I recently read the book and watched the film, and I found myself struggling with both texts and my own reactions to them.

On the one hand, both texts are beautifully crafted. Kathryn Stockett weaves together the stories of almost a dozen fascinating, complicated women. And the adaptation of Stockett’s novel, directed by Tate Taylor, has enlisted a talented cast of actresses to portray these strong characters, including Viola Davis, Octavia Spencer, Jessica Chastain, and Bryce Dallas Howard. Other than Bridesmaids, also released in 2011, how many Hollywood films can boast a cast that is almost entirely composed of women? Women talking to other women about women? 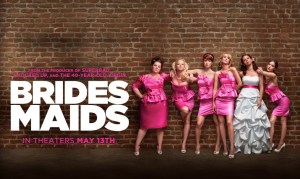 In addition to its spectacular cast, The Help is worthwhile because it is a mainstream Hollywood picture that grapples with America’s racist past, damning the segregationist policies in Jackson, Mississippi in the early 1960s. The film is set in 1963, just one year before Congress passes the historic Civil Rights Act of 1964. The world of The Help is a world in which white people were incapable of examining their own culpability in the racist power structure of the time. The characters believe themselves to be moral and most certainly not racist, and yet, they are very very racist. Those who have read the book will find that there are several major changes to the plot, involving Constantine (Cicely Tyson) and her daughter, revelations about Charlotte Phelan’s (Allison Janney) health, and Skeeter Phelan’s hair (Emma Stone is a little too well-groomed to play the role of Skeeter, in my opinion, but I digress…)

Despite these alterations to the novel, I think you will enjoy the film. But the purpose of the Ethnic Studies film series is to examine how the cinema grapples with issues of race and ethnicity. So for the next few minutes I’d like to address some other issues to think about as you watch The Help.

We cannot allow the tears and laughter that The Help generates in equal measure to distract us from the fact that the racism tearing apart 1960s Mississippi is the same racism that is tearing apart the United States in 2012. Contemporary racism is less overt, of course, and somewhat less pervasive. But it remains just below the surface of American society, which in many ways is a more dangerous racism, because it is one that we, as a society, can easily deny. When racism is bold and in your face, like when Miss Hilly begins her Home Help Sanitation Initiative, it is easy to recognize and declare as immoral. But when racism is quiet and subtle, it’s much harder to uproot. To acknowledge the racism that lurks behind the veil of inclusionary discourse in popular culture is to acknowledge that many Americans, liberals and conservatives alike, have not moved past the racial dichotomies of 1960s Mississippi. We may all be using the same bathrooms, but the belief systems underpinning Jim Crow laws remain.

To offer up just one small example, since it is directly related to The Help and its cast, I want to discuss a short clip from a roundtable of Oscar-nominated actors that was hosted by Newsweek last week. In the following clip, Viola Davis, who received a Best Actress nomination for performance as Aibileen, the depressed, emotionally-battered maid, is asked why a talented actress such as herself has only scored her first starring role at age 46. As Davis tries to explain, she is interrupted by Charlize Theron (and I still cannot figure out why Charlize Theron was there, since she has not been nomtinated for an Oscar this year.):

[Note: you can watch the video by clicking on the link below.]

Allison Samuels of The Daily Beast wrote a great article, “What Charlize Theron Doesn’t Get About Black Hollywood,” analyzing this outburst in the context of Hollywood’s racist beauty standards. Here’s what I saw happening. Charlize Theron believes that Viola Davis is saying “I’m not getting roles because I’m not pretty enough.” Charlize Theron is familiar with this lament because most white actresses will be told they are too fat or too plain or even, too pretty for a role. This burden, the burden of being judged on your looks first and your talent second, is shared by all women, regardless of race. No wonder Charlize jumped into the conversation! This is a burden she can relate to (even if it is the burden of being too damn pretty)!

Davis is lamenting that there aren’t many any leading roles for African American women in mainstream Hollywood films. Why? Because Hollywood will not make these movies. Why? Because Hollywood believes that white audiences will not pay to see movies about black women (am I referring to Hollywood as if it is a person? Yes. I imagine a white, middle-aged male person smoking a cigar and furiously crunching numbers. But I digress). Why does Hollywood make movies for white audiences? Much of Hollywood—its studio heads and producers–are under the (erroneous) belief that white audiences are the ones who are paying to see movies. But this is no more true than the belief that women don’t go to see movies. The success of Tyler Perry’s films among African American audiences and Bridesmaids among female audiences is proof that Hollywood is clinging to an outdated understanding of audience demographics. Or they’re willfully ignoring audience demographics. In short, the problem is not that Viola Davis does not look like Halle Berry. The problem is racism.

So what does Charlize Theron’s off-hand comment have to do with The Help? Both are well-meaning and empathetic. Both want African American women to know that they are “hot as shit,” that they are equal to white women and that everything is going to be okay. Both tell us that racism is about individuals rather than institutions. Both would like us to rage against a racism of the past, one which we have presumably “solved,” and empowers us to feel good about our comparative enlightenment today.

But this type of filmmaking is dishonest at best and insidious at worst. As you watch The Help tonight, I encourage you to think about how the film presents racism. Where does it come from, how does it manifest itself, why is it unethical, and how do characters address it? Does the film encourage you to examine your own role in America’s discriminatory practices or does it congratulate you for living in 2012? Don’t get me wrong, any film that forces us to think about racism in America is positive. But acknowledging America’s problems with race, only to dismiss them (much as dear Charlize has done) as something that is over and done with, provides whites with a false sense of security. That our work here is done. But it’s not.

I know that I am not alone in these views. Simply Google “The Help” and a long string of critiques appear. So I guess what I’d like to hear from readers is: what value, if any, does The Help (as a book and a film) hold? Is there value there? And if so, what is it?

This entry was posted in Uncategorized.

Great analysis. I think The Help’s greatest value is as a well-done chick flick. I had fun watching it with both my mom and my girlfriends. There are strong performances by talented actresses, and romantic relationships are not their sole reason for existence. It felt like Steel Magnolias, but with a more profound conflict than just diabeetus. Skeeter stars in a white middle-class coming of age story that makes you feel warm and fuzzy. (It also reminded me of The Secret Life of Bees in that respect.) I could definitely identify with Skeeter’s plight of being the lone brainiac with curly hair.

On the other hand, as a movie about black women, it falls short. This is not The Color Purple. Viewers are tempted to simply pat themselves on the back and say “phew, thank goodness racism is over.” Still, it’s a step in the right direction. Abileen and Minnie are nuanced characters with agency. The film has given talented black actresses well-deserved recognition. If it can start conversations about existing prejudices, so much the better. Octavia Jackson had the right idea with her Golden Globes shoutout to present-day domestic workers.

I think the best scene in The Help is when Skeeter visits Abileen’s house for the first time. Both are nervous, neither has been in an intimate social setting with someone of another race; neither is sure how to act. But through honest dialogue they come to understanding and respect. Those sorts of awkward but valuable conversations are what need to happen so things can change.

Greetings! Very useful advice within this article! It is the little
changes which will make the most important changes. Thanks for sharing!

Oh my goodness! Incredible article dude! Thank you, However I am experiencing problems with your RSS.
I don’t understand why I am unable to join it. Is there anybody else having similar RSS problems? Anybody who knows the answer will you kindly respond? Thanks!!