The Sins of the Mother: Some Thoughts on MAD MEN’s Betty Draper

In the most recent issue of Entertainment Weekly, Mark Harris’ column, “TV’s Great Bad Mommies” was devoted to the “bad mommies” featured on Showtime’s Weeds, Nurse Jackie, and United States of Tara. These women “invite you to be appalled — because, as we all know, few guilty pleasures are as nastily satisfying as secretly ragging on somebody else’s parenting skills.” His column concludes with a nod to Mad Men‘s Betty Draper (January Jones), who “performs motherhood like a scripted role — and experiences parenting less as a fulfillment than as the steep price she agreed to pay for the life of privilege she once wanted.” 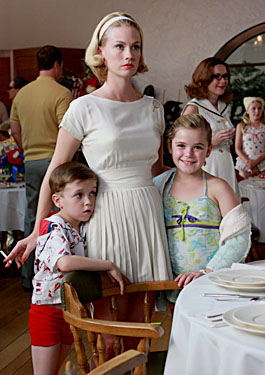 I both agree and disagree with Harris’ assessment of Betty’s approach to motherhood. While it is tempting to see her as an ice queen, as a woman who merely endures her children in order to gain access to club lunches, furs and a maid, I think this view also discounts the richness of Betty’s character. Because Don Draper’s (Jon Hamm) childhood is such a compelling mystery, it is easy to forget that Betty also experienced a traumatic childhood. Her story, like Don’s, is only revealed to the viewer in pieces.

We have learned, for example, that the late Mrs. Hofstadt was a beautiful, regal woman, but that she was also a real bitch; Betty discusses her with a mixture of reverence, fear, and resentment. Furthermore, as we discovered in last night’s episode, “The Arrangements,” Ruth Hofstadt took rather Draconian measures to ensure that her “fat” daughter lost weight (and kept it off). While sharing a tub of chocolate ice cream (with salt?) Gene (Ryan Cutrona) tells Sally (Kiernan Shipka) about how her Grandma Ruth would take her mother shopping and then make Betty walk all the way home. This parenting left an indelible mark on the adult Betty, who rarely puts anything other than vodka or cigarettes in her mouth. Oddly, Gene finds the story to be amusing, colorful even, rather than disturbing. He also urges Sally to become something other than a housewife, explaining that her grandmother did drafting work for an engineer in the 1920s. Smart women, it seems, should do things.

While this exchange exists, in part, to show some of the disdain Gene harbors for his daughter’s shallow existence, it also illustrates that he is surprisingly progressive for a man of his age and time. He sees that Betty is living a life of unrealized potential (I can’t wait for the episode in which Betty receives a copy of The Feminine Mystique [1963]) and worries that Sally, an intelligent and curious child, will grow up to do the same. “You can really do something,” he tells Sally with sudden gravitas, “don’t let your mother tell you otherwise” (I originally had a link to this scene below but it has been removed by AMC. Phooey).

After purchasing a bag of peaches for his beloved granddaughter, Gene collapses in the A & P. Sally is naturally devastated by her grandfather’s death–the only adult to take a genuine interest in her has died. Therefore, when the news is delivered to Betty by a solemn police officer, it is fitting that neither of these two adults acknowledge Sally or her grief. Instead they leave her outside to sob alone in her ballet outfit. Later, when Sally rebukes her parents and aunt and uncle for laughing over a joke (she is too young to understand that laughter is often a part of grief), Betty chastises for her for being “hysterical.” “Go watch TV, Sally,” she commands. During this exchange the mother in me longed to reach my arms through the television screen and embrace Sally. And I wondered how I was supposed to feel about Betty and Don since they did not.

Indeed, at these moments it is difficult not to hate Betty Draper. But we must remember the lonely childhood Betty must have endured walking home from the grocery store, wiping the tears from her chubby cheeks, wondering all the while how she might gain the approval of the cold woman waiting for her at home. Betty was raised to shut herself away from food and emotion–she can’t even bring herself to discuss her father’s will with him. “Can’t you keep it to yourself?” she pleads, “I’m your little girl.”

This is not an excuse for Betty’s approach to mothering, but it is an explanation. Meanwhile, Sally is left to mourn her grandfather alone in front of the television, while images of self-immolating monks dance before her eyes. 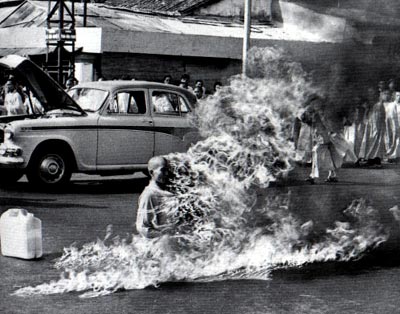 So what do you think? Is Betty meant to be a sympathetic character, or do the writers want us to hate her?