I had big plans to dissect the Big Love season 4 premiere but instead I find myself completely distracted by the fact that, after 3 seasons, the show’s creators decided to change the opening credit sequence. As I sat on the couch, waiting to hear the plaintive strains of French horn and harpsichord that open the Beach Boys’ “God Only Knows,” I was instead assaulted by “Home,”a song by some group called the Engineers.

This should not be that big of a deal, but you see, I’m a big fan of opening credit sequences. Credit sequences are arguably one of the most important segments of the text, both in film and television, because they are the first images the viewer encounters. Traditionally, television credit sequences have served a simple function, namely introducing the show’s cast, creators and guest stars, usually against the backdrop of a few images representative of the series.

This trend has changed somewhat in recent years. Programs like Deadwood (2004-2006), Desperate Housewives (2004-), Six Feet Under (2001-2005), Dexter (2006- ), True Blood (2008- ), and others have replaced this traditional format with a sequence of disconnected, “dreamlike” images that are more “generic,” than specific, more connotative than denotative. These credit sequences clearly borrow their stylistic cues from music videos, which employ chains of disparate images that stress discontinuities in time and space to evoke abstract concepts.

Of course, in this day of DVRs and TV on DVD, many people fast forward right past the opening credits. But the above sequences serve more than a utilitarian purpose — their imagery begs to be watched over and over. They beg for analysis. And I’m pleased to see that many TV scholars have recently turned their attentions to analyzing opening credits: Angelina Kaprovich on Dexter’s opening credits, Lisa Nakamura on True Blood‘s opening credits, Myles McNutt on Nurse Jackie‘s opening credits, etc.

Although I always watch Big Love via my DVR, I almost always watch the opening credits all the way through. Why? First, there’s the music. I’m not a big Beach Boys fan but “God Only Knows” gets me every time I hear it. As so many music critics have mentioned, it is highly unusual for a love song to begin with the line “I may not always love you…” What I love about the song is precisely this honesty. When Carl Wilson sings, “If you should ever leave me, life would still go on, believe me,” he isn’t making any grand claims — he knows that the world does not begin and end with his beloved. But he still recognizes the beloved’s significance, as well as his own insignificance: “God only knows what I’d be without you.” 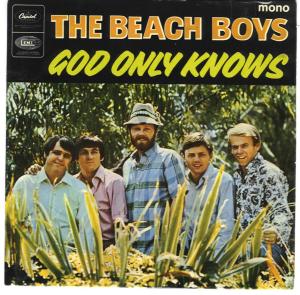 This mixture of idealism and realism, devotion and resignation,  fits well with the imagery in Big Love‘s original credit sequence. When the sequence opens we see Bill (Bill Paxton), bathed in heavenly light, reach out with confidence to his first wife, Barb (Jeanne Tripplehorn). They ice skate in a circle. When there is a cut to a medium close up of Bill we expect to see Barb again, but instead he is embracing second wife, Nikki (Chloe Sevigny), who studies his face in total absorption. Her gaze is different from Barb’s — less confident, more awestruck. Yet another cut reveals Bill’s third wife, Margene (Ginnifer Goodwin). This may be favorite moment of the sequence — Margene, the youngest and newest bride, seems the most unsteady on her feet. And she embraces Bill like a ballast in a storm.

We then see Bill and the three women form a circle, each hand clasp shot in a close up:

And then in a series of shot/reverse shot sequences Bill lovingly acknowledges each of his wives. They all seem perfectly calm, perfectly content: 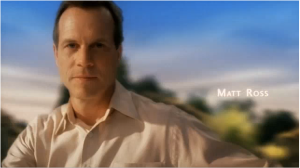 The bright blue sky, lush greens and soft lighting reflect the idealism of this arrangement, the “Principle” by which these four adults have chosen to live their lives. But in the midst of their bliss, we see a crack forming in the ice, which splits the four adults apart. This split could signify the various struggles the quartet faces over the course of each season. It could also represent the inevitable separation/destruction that will come with death:

Bill, Barb, Nikki and Margene now find themselves lost, searching for each other amidst a series of white veils:

Until they all finally reconnect…at a dinner party in space?:

This final image could be a rendering of the Henricksons’ existence in the afterlife — the family’s reward for faithfully adhering to the Principle. Or, more simply, this image could represent how the Henricksons are continually able to reconnect after each crisis. By opening each episode in this way the viewer is reminded of the characters’ own “big love.” No, I don’t support polygamy, but I find Big Love compelling because the show makes it easy for me to believe that these four people truly love each other and truly believe in the lifestyle they’ve chosen. They believe the sacrifices of polygamy are worth it — not because Bill is power hungry or his wives are brainwashed — but because they really do believe. A show about the devious Alby (Matt Ross) and his drone-like wives would not be nearly as interesting or poignant.

So, I suppose you could argue then that this change in the opening credits signals a profound change in the show’s characters and their relationships with one another. Los Angeles Times critic Allyssa Lee writes “…there’s no togetherness in this one. They’re all pretty much alone in their frames, except for the last one, where Bill and someone else are just reaching — only, they never connect. It’s all so … so distant. And so lonely,” while The Wall Street Journal‘s Dawn Fallik opens her recap with “We’re back in Utah and no longer skating on thin ice in ‘Big Love.’ Instead, the new intro has us falling, falling, falling through the air, as the four members of the Henrickson clan try to build a church, open a casino and bury past problems. We’re no longer in Beach Boy territory, folks.”

Sure sure, I get it. But I feel like this new sequence fails to establish what is so important about Big Love — why viewers keep tuning in week after week — the connections between the Henricksons. In this sequence Bill, Barb, Nikki and Margene are unable to touch each other. I think this is the wrong tone to set for this show week after week. And frankly, the final image’s nod to Michelangelo’s The Creation of Adam, is pretty ludicrous. 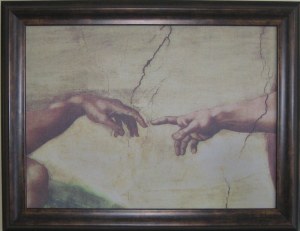 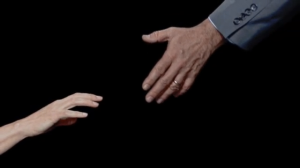 Finally, so it doesn’t seem as if I stopped watching the Big Love premiere after the credits, here are a few things I loved about last night’s episode:

Alby, dressed in possibly the dorkiest outfit ever, picks up a fine hunk of man (Ben Koldyke) at the park. Must have been those pasty white legs.

They served ice cream sundaes at the opening of the Blackfoot Magic Casino. Mormons are so naughty.

When Lura (Anne Dudek) hears that Roman (Harry Dean Stanton) is dead, she immediately goes to the safe to break out…a can of Coors light! So that’s the drink teetotalers choose when they really want to celebrate?

Lois (Grace Zabriskie) always finds a way to make to money (latest venture: smuggling exotic birds), leading me to wonder what kind of life she might have led had she not gotten mixed up with Juniper Creek. CEO of a Fortune 500 company perhaps?

Also, I don’t care what the critics say, I will never tire of Lois’ and Frank’s (Bruce Dern) attempts to kill each other in new and inventive ways. I love how Frank picked up Lois, outfitted in a girlish dress and head scarf, as if they were two kids on their way to the malt shop, a goofy moment made even more ridiculous by the two goons in the pick up truck who were planning to…tie Lois up in public?

Bill, who possibly had the most reason to hate Roman, is the only person who has the decency to close the dead man’s eyes.

So what did you think of the premiere? And are you happy with the new opening credits? Please share your thoughts below.