Why Does Pop Culture Like to Hate on Cornell? 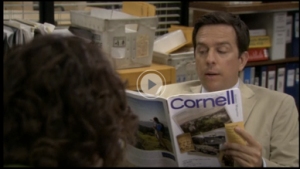 I am an alumna of Cornell, class of 1999. I regard those four years of college as some of the greatest in my life. I received a top-notch education, met an array of smart, interesting, and hilarious people, and drank a lot of alcohol. I also met my husband at Cornell and so the two of us often wax poetic about our times there: about getting beers at Ruloff’s, hiking through the gorges (“Ithaca is gorges!”), and heading to the Commons for a great meal. Our daughter has been informed that she, too, will attend Cornell (a move ensuring that she most certainly will not attend Cornell), and we have been dressing the baby in Cornell gear in the hopes that he will get Big Red fever by osmosis. In short, we love Cornell.

So of course we were both delighted when one of our favorite comedies, The Office, gave Cornell a big shout out in the Season 3 premiere “Gay Witch Hunt.” It is in this episode that we first meet Andy Bernard (Ed Helms), Jim’s (Jon Krasinski) new co-worker at the Stamford, CT branch of Dunder Mifflin. During one of the show’s signature “talking head” interviews Andy tells us “I went to Cornell, ever heard of it?” This reference is used to provide the viewer with key information about this addition to The Office’s cast: Andy is threatened by his new co-worker, Jim, and believes that mentioning his prestigious alma mater will make him appear more impressive to the show’s fictional documentary crew. It doesn’t. Nevertheless, I gushed to my husband:  “I can’t believe they’re talking about Cornell!”

Over time, however, my enthusiasm for The Office‘s Cornell obsession began to wane. You see, Andy, like Michael, is both incredibly insecure and yet has an inflated sense of self.  He is a fool. A boob. The running joke about Andy’s Cornell name-checking is that it reveals his need to brag while at the same time demonstrating that he doesn’t have much to brag about at all. He thinks his Cornell degree is impressive but no one else does. 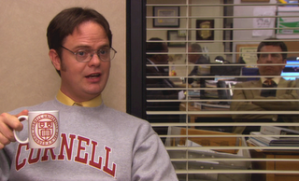 The series’ most extended Cornell reference occurs in “Employee Transfer,” when Dwight (Rainn Wilson) decks himself out in Cornell gear and proclaims that he will be applying to Cornell, all as a way to get under Andy’s skin. Andy decides to interview Dwight as part of the application process and the scene culminates with Dwight deciding to apply to Dartmouth instead since it is a “vastly superior school.” Indeed, Dartmouth is frequently ranked higher than Cornell, a fact which rankles many a Cornell undergrad. Things are starting to get personal, people.

All of this joking at Cornell’s expense got me wondering: did someone on The Office‘s writing staff know a Cornell graduate who was a total douchebag? Or was one of the show’s writers rejected from Cornell? [Note: a reader just informed me that the character of Andy Bernard is a tribute to former NBC president Kevin Reilly, class of 1984]. Or, is it possible that a Cornell degree has come to be a signifier for a particular kind of character? For example, the holy trinity of Harvard, Princeton and Yale are referenced when we are supposed to see a character as being particularly smart. MIT is used if that person is a science or math geek. If you’re smart but also a free-thinker? Then you went to Brown. And if your character loves to party? Then it’s Arizona State, Ole Miss, or any school with a good football team.

So does The Office have a bone to pick with Cornell? Or are they simply playing off of well-known Cornell stereotypes? Is Cornell synonymous with self-important fools who are not nearly as smart as they think they are? Let’s take a look at some of the other famous, fictional, Big Red alums: 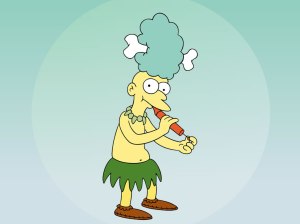 Mel first appears in the episode “Itchy & Scratchy & Marge ” as a replacement for the murderous Sideshow Bob. At some point it is revealed that Sideshow Mel is a graduate of Cornell University. Sure, he wears a bone in his hair and communicates via a slide whistle, but offstage he speaks in a lovely British accent (which means he’s smart, y’all!) and once played the role of Biff in Arthur Miller’s Death of a Salesman. He is also lactose-intolerant. Advantage: Cornell.

2. Up in the Air‘s Natalie Keener 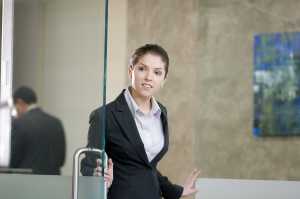 One of the first things we learn about young, ambitious Natalie (Anna Kendrick), is that she is a recent graduate of Cornell University. By citing Cornell, the movie is not necessarily highlighting Natalie’s intellectual pedigree; that is what references to Harvard, Yale and Princeton are for. Instead, Cornell is meant to show us that Natalie is a hard worker, a striver, even. She is like a yappy dog that won’t shut up until you crouch down and pet it. Luckily, Natalie becomes more likable as the film progresses and we learn more about her life. In a way, Natalie needs to get past her life at Cornell (and the rigid blueprint she had for her life) in order to embrace what she wants. Advantage: Haters.

I do not watch Ugly Betty. Or rather, I should say that I watched it once, thought it was awful, and have never attempted to watch it again. But from what I have read, the character of Nick Pepper (Max Greenfield) is a Cornell alum. And from what I have read about him, he is quite similar to The Office‘s Andy: he has an inflated sense of self, annoys his co-workers, and dresses in what he believes to be the trendiest of clothes. Normally, I would give this point to the Haters, but given that Ugly Betty is a terrible show, I am going to go ahead and call it a Draw.

4. Made of Honor‘s Tom Bailey 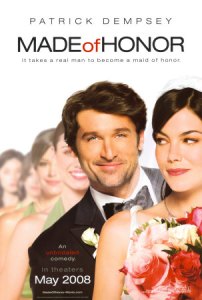 I don’t even need to describe this character, played by Patrick Dempsey, or his relationship with Cornell. The movie is called Made of Honor. Get it? Nope, I don’t either. Why substitute “Made” for “Maid”? Poor use of puns means Advantage: Haters.

In conclusion, it’s difficult to determine exactly what Cornell’s screen image is. Certainly the Cornell screen image is not as solidified as Harvard’s or Penn State’s screen image. So for now, I’ll take the Andy Bernards and the Sideshow Mels as evidence that Cornell has some significance in popular culture. And that’s all we self-important, type A Cornell grads want in the end — a little recognition.

Cornell grads: can you think of any other prominent fictional Cornell alumni? If so, discuss below. And, of course, Go Big Red!

The D2D Release: Notes on a Burgeoning Market

Yes, it’s true, my blogging has decreased precipitously over the last three months. I had a second child and he takes up all of my time, what with his eating and pooping and inability to sit up on his own. But I did recently finish one last article for the online journal, FLOW on the subject of Direct to DVD releases. In it I argue that the study of direct to DVD films (D2D films) offers an important contribution to the fields of both reception and genre studies. If you’re a fan of such classics of Hood of tha Living Dead or Leprechaun 5: Leprechaun in the Hood, then my friends, this is the article for you.

You can click here to read the article. And for those of you still reading my blog, thanks and I promise to post more frequently in the coming months.

This entry was posted in Film, The Internets, Trash Cinema and tagged American Pie, Direct to DVD releases, Employee of the Month, Film Cycles, Film Genres, Get Smart, Get Smart’s Bruce and Lloyd Out of Control, Hood of the Living Dead, Jessica Simpson, Leprechaun, Leprechaun 5: Leprechaun in the Hood, Major Movie Star, Reception Studies.