Normally, I’m not a big fan of rewatching films I’ve already seen. I have to do so much rewatching for my classes and for my research that in my free time my goal is to see new stuff. Nevertheless, over the last few months I’ve been rewatching some favorite films from my childhood, like Home Alone (1990 Chris Columbus), Mrs. Doubtfire (1993, Chris Columbus), Teen Wolf (1985, Rod Daniel), Ferris Bueller’s Day Off (1986, John Hughes), Karate Kid (1994, John G. Alvidsen), and Footloose (1984, Herbert Ross), with my own children and I’ve been surprised by how much I’ve (mis)remembered those films. When I rewatched Mrs. Doubtfire, for example, I was shocked by how my memories of that film were so conditioned by its theatrical trailer. The scenes that I found myself remembering before they happened — Robin Williams asking Harvey Fierstein to make him a woman, Robin Williams throwing a piece of fruit at Pierce Brosnan’s head, Robin Williams’ rubber breasts on fire — were the scenes that were featured in the film’s trailer:

As a child of the 1980s, I grew up with commercials, with flow, and I watched these commercials over and over, even when I didn’t actively watch them (because I was fighting with my brother or gabbing on my sweet cordless phone). These scenes travelled through my brain repeatedly, wearing a groove, making themselves at home. Robin Williams’ burning rubber breasts are a permanent part of my memories.

But it wasn’t just frequent exposure to trailers that shaped my memories of these films — my memories have also been shaped by the way I watched movies as a child, that is, by my child-self’s attention span. A few weeks ago we decided to screen Footloose for our kids, reasoning that its numerous dance scenes would make up for its snoozer of a plot about an uptight preacher (John Lithgow) who won’t just let those kids dance! But my husband and I misremembered the film — there aren’t that many dance scenes in the film. And when those kids aren’t dancing? Well, the film is pretty boring. Our kids (and our neighbor’s kid) were antsy throughout, only pepping up when a dance number came on. Then they would leap off the couch and dance furiously until the narrative started up again. So perhaps they, too, will misremember the film when they’re old like me, filing away the “good stuff,” the dancing and the Kevin Bacon, and forgetting the boring stuff.

What I’d like to talk about in this blog post, though, is my experience of rewatching a beloved film from my childhood and realizing that the film my child’s brain watched is very different from the one I watched as an adult. I’m talking about Ghostbusters (1984, Ivan Reitman). I remember being 8-years-old and actively anticipating the release of Ghostbusters, a movie which was most certainly a must-see for the elementary school set. Like most kids my age, I was obsessed: I watched the sequel and the Saturday morning cartoon, ate my Slimer candy, and of course I drank my fair share of Ecto Cooler . 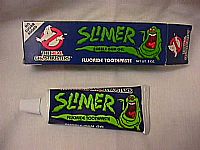 This past Saturday we rented Ghostbusters, made some popcorn, and invited another couple and their son to watch it with us (at this point my child-free readers might be asking themselves: is this what Saturday night looks like when you have young children? Yes it does, child-free friends, so please, practice safe sex). As we all sat down to watch the movie, the first thing I remembered about the film, or rather what I had forgotten about the film, is that before they become “Ghostbusters,” saviors of New York City (and by extension, the entire world), Peter Venkman (Bill Murray), Raymond Stantz (Dan Ackroyd) and Egon Spengler (Harold Ramis) are actually professors at Columbia University, studying the paranormal.

I had completely forgotten this but the moment the film cuts from a frightened librarian to the interior of a Columbia lab where Bill Murray flirts with a student participanting in his ESP tests, I turned to my children and declared “The heroes of this movie are professors, kids, just like Mommy!” The friends who were over are also professors, in Biology and Geology, so they were also excited for their son to see professors doing cool shit in a movie (this rarely happens, as you all know). After we watched the scene in which the professors are informed that their grant has been terminated, my daughter was confused “What just happened?” she asked. I explained, “It would be like if Beth’s boss took away her corn fields or if Eric’s boss took away his rocks.” Then my husband piped in “Or if someone said Mommy couldn’t watch movies.” Rocks and corn are not ghost busting, but they’re more tangible than the study of film. Nevertheless, this answer satisfied my daughter.

As I watched Venkman, Stantz, and Spengler pack up their offices and their life’s work and leave Columbia’s grand campus, I thought about the current state of academia and then, I began to watch Ghostbusters in a different way. Instead of watching the fun, comedy-horror-blockbuster of my youth, I found I was watching a vision of the future of academia, a fantasy of the Alternative-Academic career, one based wholly on the market value of the university professor’s research, rather than the broader, and somewhat less market-driven value of the professor’s ability to instruct students in that research and to engage the public in those findings.

When the professors leave academia they are not ghost busters. They’re just unemployed PhDs, which, as we all know, are a dime a dozen. What transforms these useless, unemployed academics into Ghostbusters? An ancient Sumerian god named Gozer the Gozerian, who wants to destroy New York City! These professors are literally the only people in the city who can do this job. They actually have ghost busting equipment: proton packs (for wrangling ghosts), ghost traps, and an Ecto containment unit on hand. I mean if there’s something strange in your neighborhood who are you gonna call? I don’t need the 1984 Ray Parker Jr. hit to answer that question, because the answer is, naturally: GHOSTBUSTERS! The university may not value these men, but the good people of New York certainly do. Their research will save the world! Does your research save the world? Mine sure doesn’t!

So you see, these professors have a real value. As soon as their first commercial airs, glimpsed (fortuitously) by beautiful Dana Stevens (Sigourney Weaver) just before she finds a demon in her fridge, the phone at Ghostbusters central never stops ringing. In fact, the Ghostbusters have so much business, they must hire a fourth ghost buster, Winston Zeddemore (Ernie Hudson). My childhood memories of this film have Hudson’s character, aka the “black Ghostbuster,” playing a much larger role, perhaps because he gets more screen time in the sequel? But during this viewing at least, I was surprised by how little screen time he gets. His character truly feels like an afterthought, like a producer said “You better get a black guy in there somewhere” and so they threw him in at the last minute. But I digress. All of this is just to say that business is booming at Ghostbusters and the men are finally getting the chance to prove the value — the real, incontrovertible value — of their life’s work. The market says so.

In this neoliberal (a term I use here to reference the broader trends toward the privatization of higher education) fantasy of higher education, academia within the walls of the academy is stifled and limited. But once professors are freed from the constraints of the Ivory Tower, with its navel-gazing and its pretentiousness, and are placed at the mercy of the market (aka, “the real world”), they can demonstrate the true value of their research and their pedagogy. Professors should be training our college graduates for real jobs in the real world. After all, isn’t the whole point of a university education to create future workers, future entrepreneurs, future moneymakers? Sure it is.

But what happens next? What interrupts our fairytale of flourishing academics? It’s the goddamn Environmental Protection Agency, that’s who! Walter Peck (William Atherton), the EPA representative, is the film’s heavy. I remember hating this character when I was a kid. “Why won’t he just let the Ghostbusters do their jobs? Doesn’t he realize the fate of the city is at stake? Regulation is the worst!” Peck wants to investigate the environmental impact of the Ecto containment unit, which, I have to admit, looks super shady. I wouldn’t want to live downstream from the Ecto containment unit, but if I had to choose between living with Gozer and living with Ecto in my water? Bring on the Ecto cooler! Screw the EPA! Regulation, boo, hiss!

In the final scene of Ghostbusters, all four men (yes, even Winston), are cheered by New York City residents who are grateful that they’ve been saved from the wrath of Gozer. I told my kids “Look, they’re cheering for the professors!” And then the four adults in the room laughed for a long time.

My kids laughed too. They were delighted by the film, just as I had been as a kid. But this time around, Ghostbusters gave me pause. The narrative hit a little too close to home because I am acutely aware of the market value of my degree and my profession. My Governor tells me my work is useless and elitist. So I’m waiting for the day when this dystopian future is upon us, when the key master finds the gate keeper, and we’re all packing up our offices,  just waiting for a chance to prove our true worth.